The King enjoyed his peaceful exile. Spending time in his garden, playing ironic board games, and watching the days go by. Plus, life in the castles never suited him - too much murder for his taste.

But even in exile, he couldn't get away from rumors of the Tyrant Queen. One kingdom was not enough, so it seemed. For she planned to conquer far and wide, and even diagonally.

But long gone is the tired King of old, for his exile has trained him with new Power Moves.

So with great reluctance, the King once again donned his crown and set forth to capture the Tyrant Queen. Surely she locked herself in the Red Keep with an army to keep her safe, including multiple imposter queens.

But the keys must be somewhere, likely held by her crony so-called "Kings", hidden somewhere deep within Chess House and the Caves ...

Through blood, sweat, and tears, I still prevailed xD

Wow!  This is fantastic.  A couple of notes I had:

Thanks for putting this together, it's a great watch!

It's a great game - I actually played for a while before the video, and decided it deserves a playthrough vid. Great job to y'all!

The pawns intended to be red makes a lot of sense - both in term of consistency with the rest of the enemy pieces, and visibility!

For the keys, I think just an indicator somewhere on the right panel for which keys I've picked up would be enough.

Is the design of the not-trolling room just a visual feature, or it's supposed to block/enable some strategy I didn't think of?

I was wondering about the AI - does it treat me as a simple King, or it knows that I have some tricks up my sleeve?

Also, rewatching my deaths, I actually realized that I wasn't utilizing all of the information provided - namely, the game tells me where visible/nearby opponent pieces move, and specifically told me where that sneaky Knight was, I just didn't read it :)

For the keys, you're spot on. I've got a local branch of the code for displaying for the keys on the bottom of the right panel to let you know which ones you have and which ones you need to collect. It's got some work that needs to be done before I can publish it, but it's coming.

The non-trolling room is partially a visual feature, and partially to build suspense and a sense of dread. I want the player to feel nervous when moving through that area, so it was a kind of success :P However, it's not really supposed to loop back around quite so much. Also, much of the worldgen was built in the final day or two of 7drl, so I'm just happy it functions at all!

The AI treats you as a simple King, which is why you're able to pull off some moves that seem obvious given what Power Moves you have available. However, the AI actually takes a huge number of factors into consideration when deciding which piece to move and where, and adding in a "The King has Power Moves?!" factor is something I've been playing around with. There are also a bunch of knobs we can tweak to change the AI behavior, and we're toying with the idea of making different areas feel different by tweaking these knobs. That way a Bishop in the Caves might behave differently than a Bishop elsewhere in the world.

And good call on looking at all the information available to you. While Checkxile gives you a lot of information, sometimes it's hard to interpret exactly what it means. This too is a result of the whole game being built in 7 days, and is something we'd like to improve upon.

I love this. Such a great idea and execution.

Thanks! It was a hectic week, but I'm proud of what we were able to put together!

Such a lovely concept, and really well executed! This was a pleasure to play, thank you!

First, death is a bit too unforgiving given the length of the game. How about savepoints, or "undo" move (maybe available only for moves that kill you, so if you back yourself into an un-winnable situation you'll still lose, but don't have to lose from blunders alone?). I also frequently died from a key repeat in some direction, and didn't see some piece in time, so maybe a "check!" that interrupts key repeats? Or, like other roguelikes, interrupt key repeats when an enemy is spotted?

Second, the final room was super exciting and appropriate when I first saw it, but then it was anticlimactically over in two moves (although the ending screen was great, and taught me two new words)… I would suggest it more challenging by putting the pieces out of range of a single rook power move. (Or maybe you tried that, and then the room proved too hard?) An undo or a savepoint would have also been fun at the end; I also didn't realize the game would end as soon as the final queen was taken, I kind of wanted to also try first annihilating all the other pieces in the final room, which might be more challenging strategically.

But, having two moves between when a piece spots you and when it moves is, I think, an appropriate mechanism.

And, it's lovely the way it is with, I assume, randomly generated maps. But I can also imagine lots of possibilities for really devious room/level designs, effectively chess puzzles for this new variant of power moves+pawn summons, that could make this have DROD-level depth and complexity.

Thanks for the detailed feedback. It's actually kind of funny reading your comments, because many of them are almost verbatim what dotSamm  and I talked about: a "You're about to move into check, you sure you want to do that?" system, enhancing the final boss to be a bit more challenging, a checkpoint/save/lives/HP system, different types of map generation, etc.  The only reason we didn't dig into those is because the 7 days we had to  build this game from scratch went by surprisingly fast.

However, we are continuing development on A King in Checkxile, and you are asking for the very things we are eager to build :)

Thanks ! Glad you enjoyed it :)

its a cool concept

Thanks!  It definitely could use some tuning, and more work in balancing it, but I'm pretty happy with where we got in a week. 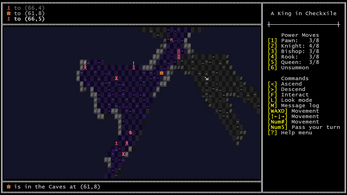 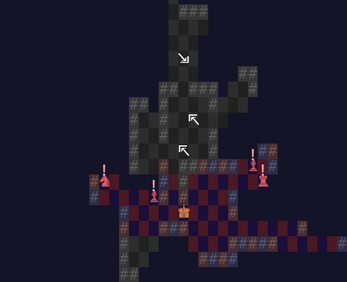 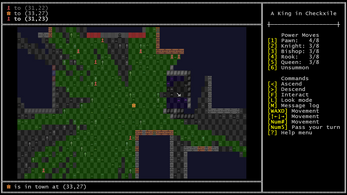 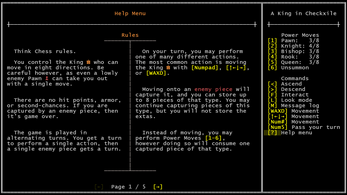 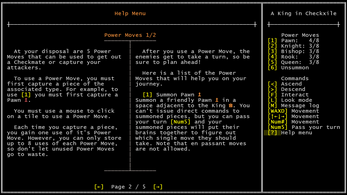